We started out our morning by heading across town to Makoshika State Park for a hike. I was kind of excited about this because the pictures that we found online looked incredible, and the hike appeared to be a little more challenging than the one we took in North Dakota. It was a complete disappointment to find that the road leading to most of the trails was under construction while we were there and the trails were inaccessible. 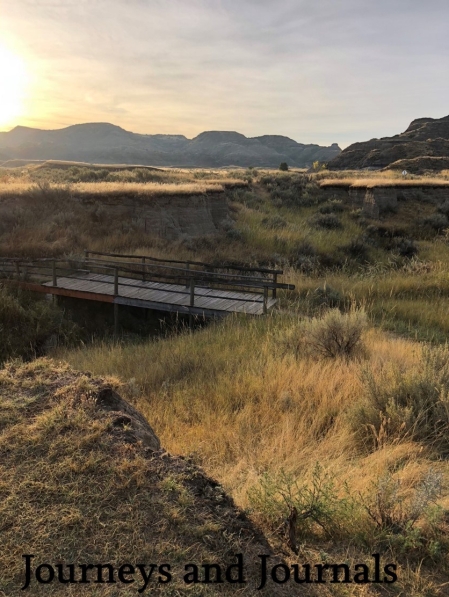 There was one shorter trail – the Bluebird Trail – that was still open and available for hiking. The sights from this trail were still amazing and we were able to gain a little bit of elevation to get even more amazing views. The landscape was certainly different than what we were used to and the pictures don’t do the place justice. I still wished that we had more options for hiking longer trails, but it really probably was a blessing in disguise as our day turned out to be quite a bit longer than we had anticipated, so getting an earlier start was a good thing. I definitely would LOVE to go back here again when there are more trails open.

So, I’m not entirely sure what I THOUGHT Montana would look like, but it was not at all what I was expecting. I think I had envisioned it to be heavily wooded.  Hills. Mountains. Forests for miles. You know, bear country. Turns out is actually just a vast expanse of nothingness. I had planned on using the drive time to try to find things along the route to check out, but with a complete lack of cell phone reception anywhere in the state, I didn’t have much in terms of resources to use in my search. But, I quickly realized that there likely wasn’t anything of interest along the route anyway. We could drive for MILES without even coming across any towns and there were a few times that I would see a sign displaying the distance to a certain town and think, “Oh, I’ve heard of that one before, it must be a decent size”, only get there and realize that it was just another little podunk town the same size or smaller than the town I grew up in (Population: 5,000).

Aside from pondering how far people had to drive to get to a Walmart, most of our entertainment revolved around admiring the measly (compared to Minnesota) crops and trying to guess what the name of the next creek would be that we happened to cross – which all happened to be named after animals for a long stretch of road.

We took the absolute longest possible route across Montana – going from the Southeast corner to the Northwest corner – which didn’t help the fact that our day of driving seemed to take forever. We had been asked by a number of friends and family if we were going to Glacier National Park – which is apparently a very popular attraction. The bummer about National Parks (like Glacier) is that they do not allow dogs on their hiking trails. I’m not 100% sure why, but they don’t. Luckily, I knew that ahead of time so I didn’t plan on spending much time there.

While I knew we couldn’t hike there, I had done enough research to know about the “Going-To-The-Sun Road” which was also recommended by a friend. I also knew that the Going-To-The-Sun Road was the road that connected the park’s east entrance to its west entrance. The GPS didn’t recognize the name of the road, so when we had left, I just typed in “Glacier National Park” to get us going in the right direction. It wasn’t until we got there that I realized that there was a separate entrance that basically went nowhere (and happened to be the one that our GPS brought us to). The pro: We happened to be there on “National Public Lands Day” which meant free entrance to the park. The con: Apparently that meant that there were no park rangers or other park staff on duty that day. And national parks apparently don’t believe in maps. So we seriously could not find where we were supposed to go.

In our attempt to find out where we were going, however, we did find some picturesque views and what, I believe, is the quintessential “Glacier National Park” lake/mountain-in-the-background location. The “beach” was made up of colorful, flat rocks that looked like they don’t actually belong there. It was an accidental detour that kind of turned out okay. Once we wound our way back out of the park entrance that didn’t actually go anywhere (except to the lake), we found one small spot of cellphone reception where we could load a map and search for where we actually wanted to be.

Once we managed to find where we were going and wind our way 20 miles north of where we were, we finally arrived at the start of the Going-To-The-Sun Road. I was surprised to find that this particular entrance to the National Park seemed to lack any fanfare at all. It was really just more of a “are we on the right road or aren’t we?” kind of experience. We WERE on the right road (turns out) and started our slow, winding journey on the Going-To-The-Sun Road. It is definitely a sight to see. It rained for part of our drive, which was a bummer, and we kind of felt like we were racing the sun, but we did manage to stop in between the raining and take some pictures quick pictures. The fall colors of the undergrowth painted the hillsides and in some ways it was a little eerie to see so much beauty scattered amongst the charred pine trees that had recently burned due to wildfires. 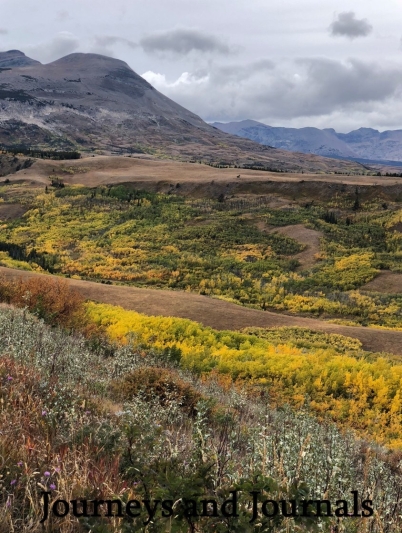 All in all, it was kind of a fun drive and the views didn’t disappoint. I do think it would be fun to go back there maybe during the spring and when it’s not raining, but the fall is a BEAUTIFUL time to be in this area with all of the National Forests and foliage. We made it through most of the pass before it got dark out and stayed at the La Quinta Inn & Suites in Kalispell, Montana. It was the first time I had stayed at a La Quinta Inn & Suites and I must say, this one was much nicer than I was anticipating with a separate kitchenette/living room. And the best thing about them, of course, is that they are ALL DOG FRIENDLY.

When I planned this trip, I had every intention of getting to the hotels at reasonable times and searching for dog-friendly restaurants in the area we were staying and trying them out for supper each night. But later nights than anticipated foiled those plans and we ended up getting carryout from the local Applebees and eating it in the room before crashing into bed.

So, random other observations of Montana, in general?